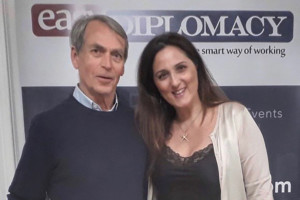 Christian B.M. Berlakovits – Ambassador – Embassy of the Republic of Austria to Italy

“Diplomacy is an art that has solid roots in the past. Its practice is entrusted to a bureaucratic model with its own rules, procedures and ceremonial, often difficult to understand for whom is not an “insider”. In the last decades the diplomatic world has demonstrated to be able to move with the times without losing that modus operandi that dates back to the drawing rooms of the Vienna Congress: after all, the birth of international bodies that were unthinkable less than a century ago – from the United Nations to the European Union – makes it necessary to continuously update our profession.

Today people who work in a diplomatic representation don’t make use of parchment, seal and goose feather, but use the most modern computerization technologies, simplifying and speeding up enormously the work – always very complex – of an embassy or a consulate. And yet, we keep talking about ceremonial, protocol, diplomatic couriers: to modernize the working tools doesn’t necessarily mean to abandon multi-century traditions that have become customary by now.

Easy Diplomacy is able to combine these two aspects of the diplomatic world – tradition and modernity – granting discretion and professionalism, as it’s required in our sector. For the diplomatic representations it offers a complete and useful guide to extricate themselves between the rules of the ceremonial and the (often as complex) daily life in a foreign country. It supplies the necessary tools for simplifying and speeding up the daily tasks. It promises important advantages for who is part of the diplomatic world, facilitating private buying and selling with an online notice board, and offering promotions and discounts for members. Diplomacy, after all, is not only politics and administration, but also and above all communication; and the art of communication has had to evolve at a very high speed in the past years to move with a te chnological revolution that doesn’t seem to come to and end yet. Easy Diplomacy is novelty and Innovation together, and therefore expression of the cutting edge of today’s diplomatic world.Where but in Rome, historic capital of the diplomacy, could ever an idea like Easy Diplomacy be born? Today the Eternal City hosts the greatest number of diplomatic seats in the World, considering the simultaneous existence of representations accredited to the Italian Republic, the Holy See and International Organizations.

Therefore, as Ambassador, I can only support this project and invite everyone to do so. It’s just because it offers services and benefits to the entire diplomatic world that it’s in the interest of all of us to contribute to achieve one of the primary objectives of Easy Diplomacy: to grow and improve with its users to meet their requirements and needs. My best wishes to this brilliant initiative and my most sincere thanks to Easy Diplomacy for the hard work invested”

Christian B.M. Berlakovits – Ambassador – Embassy of the Republic of Austria to Italy